1
This week as children finished their semester exams in Lucknow, we engaged them in an interesting game of Minefield. In this game a team member is blindfolded and the rest of the team has to guide this blindfolded team member across the minefield by giving instructions from behind the line.
The children learnt quickly that taking small steps, using a single person to communicate directions and trusting the direction giver led their teams to success. During this activity we could also see the increase in children’s confidence from where it was during the 1st Khel Planet workshop. They were nominating themselves to take turns being blindfolded rather than push some other kid forward, they were identifying strengths of team members and assigning roles accordingly, but at the same time making sure that everyone in the team got to play a role. 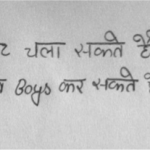 WHAT DO CHILDREN THINK ABOUT GENDER ROLES?Blog 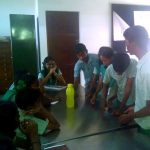